I’m not one of “those” guys, really. You know the ones — the zealots who claim that their favorite OS or application is and will be forever more the end-all-be-all of computing.

As a rule I recommend and use the best tool for the job – whatever that might be. My main laptop is Windows XP, my family and customers use just about every recent version of Windows or linux.  In fact, my own servers are a mix of Win2k*, RedHat, CentOS, and Ubuntu, my other laptop is Ubuntu and I switch back and forth between MSOffice and OpenOffice as needed.

Today surprised me though. I realized that I had become biased against Ubuntu in a very insidious way— My expectations were simply not high enough. What’s weird about that is that I frequently recommend Ubuntu to clients and peers alike, and my company (MicroNeil in this case) even helps folks migrate to it and otherwise deploy it in their infrastructure! So how could I have developed my negative expectations?

I have a theory that it is because I find I have to defend myself from looking like “one of those linux guys” pretty frequently when in the company of my many “Windows-Only” friends and colleagues. Then there are all those horror stories about this or that problem and having to “go the long way around” to get something simple to work. I admit I’ve been stung by a few of those situations in the past myself.

But recently, not so much! Ubuntu has worked well in many situations and, though we tend to avoid setups that might become complicated, we really don’t miss anything by using it – and neither do the customers we’ve helped to migrate. On the contrary, in fact, we have far fewer problems with our Ubuntu customers than with our Windows friends.

We have an old Toshiba laptop that we use for some special tasks. It came with Windows XP pro, and over the years we’ve re-kicked it a few times (which is sadly still a necessary evil from time to time on Windows boxen).

A recent patch caused this box to become unstable and so we were looking at having to re-kick it again. We thought we might take the opportunity to upgrade to Windows 7. We wanted to get it back up quickly so we hit the local store and purchased W7pro.

The installation was straight forward and since we already have another box running W7 our expectations were that this would be a non-event and all would be happy shortly.

After trying several of the recommended solutions without luck I was ready to quit and throw XP back on the box. Instead I followed a hunch and forced W7 to install all of the available patches just to see if it would work. IT DID!

Or, it seemed like it did. After the updates I was able to turn on the external display and set up the extended desktop… I was starting to feel pretty good about it. So I moved on to the printer. (more about the display madness later)

We have a networked HP2840 Printer/Scanner. We use it all the time. Joy again, I discovered, the printer was recognized and installed without a hitch. Printed the test page. We were going to get out of this one alive (still have some day left).

Remember that scene in perfect storm — They’re battered and beaten and nearly at the end. The sky opens up just a bit and they begin to see some light. It seems they’ve made it and they’re going to survive. Then the sky closes up again and they know they are doomed.

Again I searched for solutions and found only unsolved complaints. Apparently there is little to no chance HP is going to solve this problem for W7 any time soon — at least that is what is claimed in the support forums. There are several workarounds but I was unable to make them fly on this box.

Remember the display that seemed to work? One of the workarounds for the scanner required a reboot. After the reboot the display drivers forgot how to talk to the external display again and it wouldn’t come back no matter how much I tweaked it!

Yep– like in perfect storm, the sky had closed and we were doomed. Not to mention most of the day had evaporated on this project already and that too was ++ungood.

We decided to punt. We would put XP Pro back on the box and go back to what we know works. I suggested we might try Ubuntu– but that was not a popular recommendation under the circumstances… Too new an idea, and at this point we really just wanted to get things working. We didn’t want to open a new can of worms trying to get this to work again with the external monitor, and the printer, and the scanner, and…

See that? There it is– and I bought into it even though I knew better. We dismissed the idea of using Ubuntu because we expected to have trouble with it– But we shouldn’t have!

None the less… that was the decision and so Linda took over and started to install XP again… but there was a problem. XP would not install because W7 was already on the box. (The OS version on the hard drive is newer). So much for simple.

Back in the day we would simply wipe the partition and start again — these days that’s not so easy… But, it’s easy enough. I grabbed an Ubuntu disk and threw it into the box. The idea was to let the Ubuntu install repartition the drive and then let XP have at it — Surely the XP install would have no qualms about killing off a linux install right?!

In for a penny, in for a pound.

I thought to myself that if I’ve already wasted a good part of the day on this I might as well let the Ubuntu install complete and get a feel for how much trouble it will be. If I ran into any issues I would throw the XP disk in the machine and let it rip.

I didn’t tell Linda about this though — she would have insisted I get on with the XP install, most likely. After all there was work piled up and this non-event had already turned into quite a time waster.

I busied myself on the white-board working out some new projects… and after a short time the install was complete. It was time for the smoke test.

Of course, the laptop sprang to life with Ubuntu and was plenty snappy. We’ve come to expect that.

I connected the external monitor, tweaked the settings, and it just plain worked. I let out a maniacal laugh which attracted Linda from the other end of the MadLab. I was hooked at this point and so I had to press on and see if the printer and scanner would also work.

It was one of those moments where you have two brains about it. You’re nearly convinced you will run into trouble, but the maniacal part of your brain has decided to do it anyway and let the sparks fly— It conjured up images of lightning leaping from electrodes, maniacal laughter and a complete disregard for the risk of almost certain death in the face of such a dangerous experiment! We pressed on…

I attempted to add the printer… Ubuntu discovered the printer on the network without my help. We loaded up the drivers and printed a test page. More maniacal laughter!

Now, what to do about the scanner… surely we are doomed… but the maniacal part of me prevailed. I launched simple scanner and it already knew about the HP2840. Could it be?! I threw the freshly printed test page into the scanner and hit the button.

All of it simply worked! No fuss. No searching in obscure places for drivers and complicated workarounds. It simply worked as advertised right out of the box!

Linda was impressed, but skeptical. One more thing, she said. “We have to map to the SAN… remember how much trouble that was on the other W7 box?” She was right – that wasn’t easy or obvious on W7 because the setup isn’t exactly what W7 wants to see and so we had to trick it into finding and connecting to the network storage.

I knew better at this point though. I had overcome my negative expectations… With a bit of flare and confidence I opened up the network places on the freshly minted Ubuntu laptop and watched as everything popped right into place. 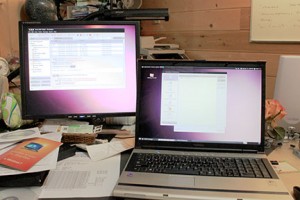 In retrospect I should have known better from the start. It has been a long time since we’ve run into any trouble getting Ubuntu (or CentOs, or RedHat…) to do what we needed. I suppose that what happened was that my experience with this particular box primed me to expect the worst and made me uncharacteristically risk averse.

Next time I will know better. It’s time to re-think the expectations of the past and let them go — even (perhaps especially) when they are suggested by circumstances and trusted peers.

Knowing what I know now, I wish I’d started with Ubuntu and skipped this “opportunity for enlightenment.” On the other hand, I learned something about myself and my expectations and that was valuable too, if a bit painful.

Ubuntu to the rescue!

2 Responses to “Ubuntu to the rescue”